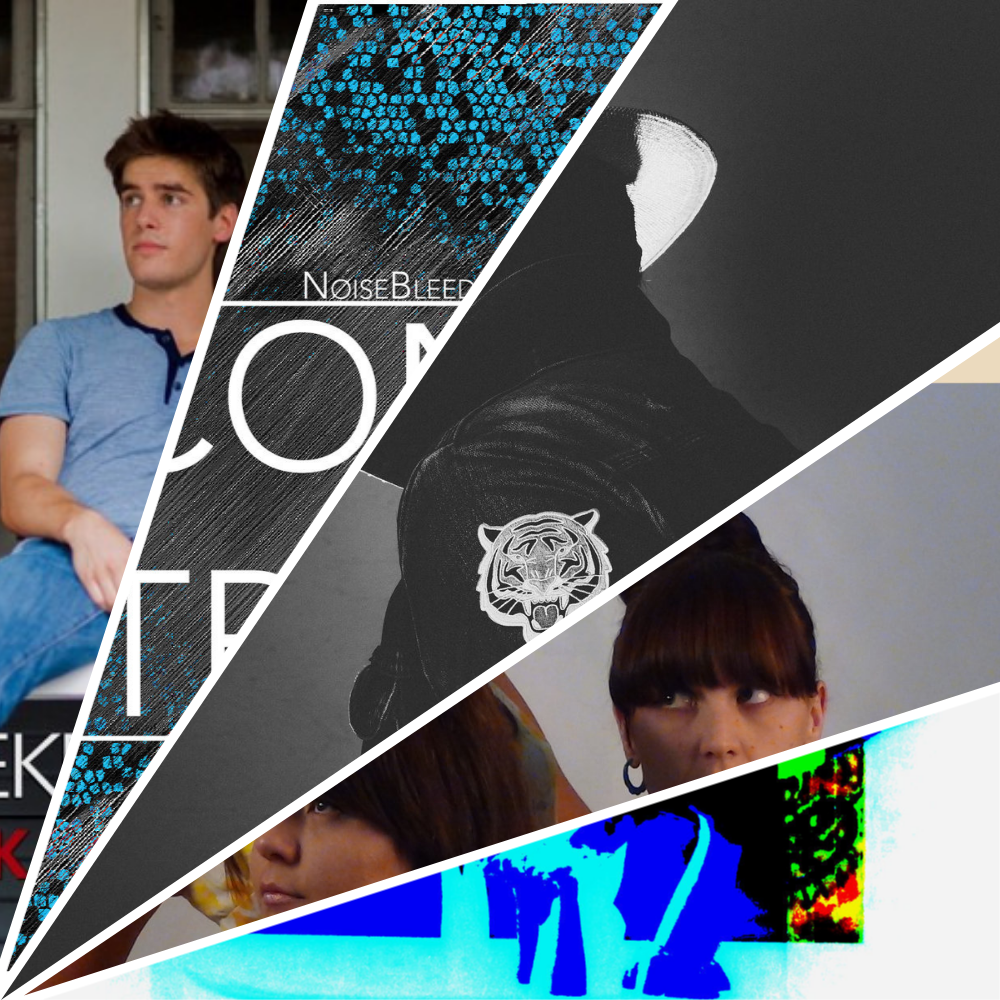 As the year winds down, it’s easy to start summarizing the ups and downs of the past 11 months. However, December has only begun, and good art is being made all the time. This sixth installment of Singles Grab Bag is half comprised of new music that came out in just the past week or so, with the others coming from late autumn. Read on for another genre-hopping mix of six local singles from artists both well-known and underground.

This new single from up-and-coming alternative act NoiseBleedsSound is an exercise in builds and releases. The contrast from pent-up verse to liberating chorus works well with the song’s concept, which is about finding freedom in letting go of fear. That sentiment is not a new one, but the way the band works with juxtaposition breathes a confident, heartfelt life into “Control”.

As the verses kick in, cymbals clash and guitars chug in a repetitive grind, building to a transitional pre-chorus of plaintive nonverbal backing vocals. When the following chorus strikes, though, the undercurrent of chaos clears into a sunlit major key with a smooth guitar line and full lead vocals. The 3/4 meter is a smart choice, too, giving the chorus a dance-like feel that is earned over a gradual transition from the more rigid 6/4 of the verses.

The chorus proclaims “I want to lose control / Stripped down and bare and fragile” in a melody that gets catchier with each listen. In those lyrics lie another level of juxtaposition, namely that such uneasy states can provide ease. The song reflects that freedom is as much of mind as it is of circumstance.

As singles go, “Control” runs a little long, mostly due to an instrumental bridge that dwells in minor key angst. The indulgence might have made more sense with the theme of letting go were it to soak in the sunnier aspects, but that would require a structural overhaul. “Control” is nothing if not structured, and that’s to its own conceptual benefit. NoiseBleedsSound has done nice work of emboldening its lyrics through musical symmetry, and it’s another promising stepping stone to the band’s inevitable full-length debut.

"Back in Town" by Beau Jennings and The Tigers

The introductory chime of “Back in Town” rings of bubbly pop music, and while it alone doesn’t capture the musical layers of the recording, it does indicate a notable power pop sensibility woven into the folk rock single. Beau Jennings and The Tigers plays big chords and simple melodies, while subtle choices like the chorus’s secondary minor key and backing vocals keep it from feeling too built for the masses. There is much to be said for his five-piece band of seasoned heavy hitters.

As Jennings states in the lyrics, “Everybody’s got a solo record”, and he’s “trying to find that old band feeling”. Here, he’s referring to his ambitious solo effort from last year, The Verdigris, while pointing out the transition back to full band front man that this release represents. The literal tone doesn’t stop there, as just about the entire song is written explicitly about this point in time of Jennings’s career.

“Back in Town” is literally about being back in town, and he reinforces this with loads of Oklahoma references outsiders may not know. He touches on the OKC Thunder, BRONCHO, Empty Bottles, and kicks it all off with an opening line that may or may not be a sly twist on John Moreland.

For all of its immediacy, the single does offer some depth, and this makes sense considering how the song was written. It’s a direct line to Jennings’s inner thoughts, and he presents specifics in a way that is relatable. “The Empty Bottles are playing tonight” could mean any band in any town.

"Still Mine" by The Ruskettes

With a throwback surf/doo-wop sound, “Still Mine” is the charming lead track to Bad Days and Heart Breaks, the new full-length album by Tulsa’s The Ruskettes. The song has a fun duality with a sad first half and an upbeat second half, nearly splitting the 2-minute runtime right down the middle.

The sparse keyboard and group vocals that populate the former expose the trio’s preference of natural live recording to reliance on metronome precision. That the band’s sound is rough around the edges is of little consequence to the style for which it aims. When the full band kicks in for the second half of “Still Mine”, its flavor feels all the more spontaneous because of it.

Also unexpected is the single’s ending, which tapers with the line “I’d still feel the same about you” mid-bridge in the song’s rock groove. For all of its change-ups, “Still Mine” plays a consistent message throughout. The narrator is still in love the song’s subject, still reminiscing while fully aware that “the time has passed.” Perhaps the point is that despite different waves of music, the message remains unchanged. That might be reading too much into it, though, as the tone is far away from pretentious. The Ruskettes are a fun, peppy listen made for the unlikely yet immediate combo of heartache blues and dancing shoes.

“At what point in time was this America great?” questions Druce Wayne in his second verse on “PRVLG”. On his recent rap single, Wayne stands up and bares his thoughts on white privilege in the wake of ongoing racial and political tensions. The aforementioned line especially shows him willing to face controversy in one of America’s reddest states.

As a white male himself, Wayne represents an important voice in the #BlackLivesMatter movement, and he doesn’t take the platform lightly. He urges change in his fellow white people at the place that all change begins:  awareness. His repetitive chorus insists all listeners to “check your privilege” while his verses present scenarios of inequality and hypocrisy. While some examples are overly contrasted–most of his audience probably does not wear Armani watches–others like Facebook activism and Pokemon Go are direct hits. Wayne is careful not to wag his finger in white guilt territory, however, as the line “your privilege, it don’t mean that you’re a racist” indicates. He’s just trying to amplify a nationwide wake-up call.

“PRVLG” is also a total banger. Featuring a choice sample and skillful production work by Joey Sativa, the single is big and loud, exactly as it’s meant to be. The instrumental’s pitch shift towards the end is perhaps unnecessary, but it does keep the pace fresh even as it closes out.

Bright, warm, and leisurely, the new single from Nick Williams is a sunny ray of acoustic pop that might come in handy during this season’s sudden turn to freezing temperatures. It’s a bubbly number about finding sweet, domestic solace in a welcoming lover after a long week.

Williams hits all the right notes with detailed imagery on lines like “bare feet, wine, and candlelight” and “oceans of flowing linen.” His smooth vocals and casual guitar capture the breezy tone of the song as friends join him on drums, bass, and keyboard. This fuller arrangement is a new development for Williams, whose 2015 Reaching for the Shoreline EP was a stripped solo effort. On “Weekend Love”, however, he has given his music the studio treatment, and the quality shows.

There’s a nice bridge around the 2 1/2 minute mark that throws in some brief chord modulation and electric guitar noodling. It’s at this point that the song starts to go on a bit longer than commercial successes usually prefer. “Weekend Love” absolutely works at its current runtime of 4 1/2 minutes, but if he’s swinging for a more radio-friendly hit, it may be less likely to happen past the 3 to 3 1/2 mark for this style of music.

Regardless, it is a great summer song for the off season. Williams talks at one point of finding “a place between the sun and the shade,” and “Weekend Love” has certainly found the sweet spot.

The atmosphere assembled on “Jin.formation” is both familiar and alien. It hums with chill beatmaking, and it features soft guest vocals that caress the ear in trendy reverb. Its use of disorienting panning, excessive echoes, and indistinguishable lyrics, however, make for an elusive core.

This experimental approach is typical for Laine Bergeron, who makes his debut here as Laine but previously wore the moniker Shameless Friend. Under that name, he released a number of works for a couple of years that meditated on deep concepts with spacey electronic soundscapes. As Laine, however, he incorporates a more tangible palette, one that is percussive and glitchy and much more inclined to feature the human voice. It’s possible that his part in the short-lived three-man electronic group Harpa (which included Sardashhh and Askanse) played some role in the updated sound, but with tracks like “Jin.formation”, Laine remains more abstract than his contemporaries.

On this track, dripping wet synths and bell chimes flow in and out of focus as Julius the Robot’s occasionally tampered-with vocals float outside of the metallic beat. It’s busy, but Laine is also sure to let his music breathe in the space it creates. Its lyrics in particular are minimal, a quality which is directly inverse to the maximal nature of his subject, Information.

Laine’s new album, Increase the Delusion!, dropped yesterday and is available at the player above. A music video for “Jin.formation” was also released this week and is linked below.

This article was originally written for Cellar Door Music Group (cellardoormusicgroup.com). It is archived here with the publisher’s permission.

Local Music Is Our Passion

Join us for a limited capacity, socially distanced live concert on the lawn of Norman’s iconic Prairie House. Tickets reserve a marked spot that will hold up to 5 people. Bring your own drinks, blanket, and chairs. Masks will be encouraged when not seated. eventbrite.com/e/beau-jenning…

Another NMF Transmission coming at you soon! Join us at 8 p.m. next Friday, October 30 for some pre-Halloween fun with indie rockers @husbandsOKC, who released their latest single "Garth" last month. It streams for free on FB, YouTube and Twitch! More at: normanmusicfestival.com pic.twitter.com/tKWRADMaAP

Chasing creativity is always a journey, how has it changed during COVID? Let’s be honest and a bit vulnerable and discuss the creative process on Wednesday with @soozanto and @raywalkerjoshua. Submit your questions and get tickets at: bit.ly/sceneskeleton1…. pic.twitter.com/Iv8RvH9hHh

Thanks so much to everyone who came out for #cassetteweek2020! We had a great time sharing local music, bringing cassette awareness to the public, and giving away some free swag in partnership with @DigItokc (congrats to our winners Ellie H & Jacob A)! Do it again next year? twitter.com/mikewmcvey/sta…

Come get the new @chelseadaysband release before it drops later this month! 'Unemployment Tapes' pairs great with these open streets and blue skies, too, so come check it out exclusively this afternoon at @DigItokc in the @plazadistrict! (plus - we're doing a rad giveaway!) pic.twitter.com/8yNpLuIC7W

We got a giveaway happening tomorrow - just read the instructions & you could win! pic.twitter.com/da1twe0zYd

Let’s talk about the creative process and how it’s changing during the pandemic. Submit your questions for @soozanto and @raywalkerjoshua at: bit.ly/sceneskeleton1… pic.twitter.com/c3AfV3JOqR

Tonight at Chisholm Creek !! Looks to be a fine evening. pic.twitter.com/uRrvbcugwv

Sales on this shirt close tomorrow, there’s a few left, get one if you want! Orders that have already been placed are being packed and shipped today. pic.twitter.com/fSkeETgJG1

And Then There Were Two is an original, multi-genre influenced, acoustic Americana/Red Dirt duo from Tulsa and they join us for Arts in the Air this Saturday at 7 p.m. tulsapac.com/events/2020/th… #ArtsintheAir #WeMakeEvents @TulsaFMAC @WilliamsUpdates @SPPlusCorp pic.twitter.com/DegQf2iOhk

Back 2 back livestream shows this weekend! Hope to see ya in there 💙 pic.twitter.com/u6Ih3kdIr4